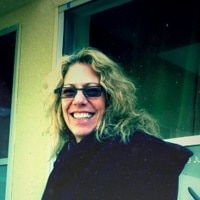 Julia Dean is a photographer, educator, and founder of the Los Angeles Center of Photography, formerly The Julia Dean Photo Workshops. She began her career as an apprentice to pioneering photographer Berenice Abbott. Later, Julia was a photo editor for the Associated Press in New York.  She has traveled to more than 40 countries while freelancing for numerous relief groups and magazines. Her extensive teaching experience includes over 30 years at various colleges, universities and educational institutions including the University of Nebraska, Los Angeles Valley College, Los Angeles Southwest College, Santa Monica College, the Santa Fe Workshops, the Maine Photographic Workshops, Oxford University and the Los Angeles Center of Photography.

For the past 14 years, Julia has concentrated on street photography around the world. For the past four years, street shooting in downtown Los Angeles has been her primary focus. Recently, one of her L.A. street photos —The Kiss — won for the United States in an international street shooting contest. Julia received a Bachelor of Science degree in photography at the Rochester Institute of Technology and a Master of Arts degree in journalism at the University of Nebraska, and is the author/photographer of the award-winning children’s book, A Year on Monhegan Island.