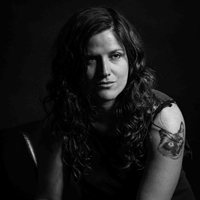 Jen Rosenstein is a photographer and director based in Los Angeles, CA. She specializes in environmental portrait photography. Not only does she take portraits of people, but she also takes portraits of their stories, detailing the contours and history of each story. She chooses to devote her life to making photographs because she feels the need to make them. When a story crosses her path, she jumps on it and will follow it, capturing the story in a single image to share with others.

In 2009, Rosenstein was introduced to Joey Santley through an assignment to take his portrait for Orange Coast Magazine regarding his Green Foam surfboard company in San Clemente, CA. Joey was impressed by her work and Rosenstein was intrigued by the unseen grittiness of the surf industry. He gave her the opportunity to meet the men behind the surf industry, which gave her full range to document them. Tablistas de San Clemente is a project of heart and dedication. Rosenstein’s curiosity and fascination with the surf industry resulted in this project that has been in the works for over two years. She photographed all of …Lost surf board shapers, including MAYHEM. Jen aims to have the opportunity to travel around the world to continue this body of work with other surf board shapers. She plans to publish a book of the work in the future.

In the past few years, Jen’s work has taken her to unexpected places. One project led her to wading in oil during the BP Horizon Oil Spill for her series Dirty South. She shadowed Grammy Award Winner, Jason Mraz, capturing his story from the screaming crowds to practicing behind stage to recording his new album. In each project, she captures the personalities, the beauty, the tragedy, the joy that lies behind each individual.

Her most recent assignments include photographing Charles Barkley, Jennifer Hudson, Tim Gunn, Jason Mraz, Snow Patrol, and Maroon 5. Recently she was recognized by Photo District News’ 2010 Faces Contest and has recently been nominated to PDN’s 30 New and Emerging Photographers 2012 / 2011.

As a director, she has directed videos for Snow Patrol, POLAROID Camera, Skyler Stonestreet, Jesse Thomas, and The Young Romans.

Jen Rosenstein lives in Los Angeles, CA. She studied Photography & Film at Art Center College of Design, where she earned her BFA in 2008.