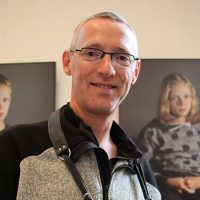 On assignment, Kingma is fast and furious with digital equipment, but for his personal work, he likes to slow down and enjoy the craftsmanship of his analogue systems, such as a Hasselblad 501CM or a Chamonix 045N-2, a 4×5″ large format view camera. He develops his films at home.