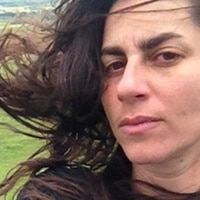 Eden Batki has been taking photographs since the age of 13 with a Canon AE-1 given to her by her father. She has worked with The New York Times Magazine, Paris/LA, Girls Like Us, Italian GQ, Monocle, Sunset, Arthur and Paloma Powers as well as numerous record labels and advertising agencies. Her music and art films have appeared on Nowness, screened at Outfest, the Museum of Art and Design and Human Resources Gallery.

Batki’s main topics are laughter clubs, goddess festivals, artists, queers and lovers. She has taken herself around the world to learn about and photograph seaweed, tea, wild eating and traditional ways of living. Her feature length film Weedeater, about an urban forager and plant communicator, is screening around the world.