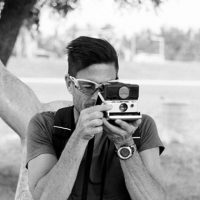 Daniel Milnor is currently “Photographer at Large” for Blurb, Inc. the world’s premiere print-on-demand publisher. He splits his time between the smog-choked arteries of Southern California and the spiritual landscape of New Mexico.

Milnor is a former newspaper, magazine and commercial photographer who now works primarily on long-term projects. His work has taken him from the rural corners of the United States to Africa, Asia, Europe and Latin America.

He has taught at Art Center College of Design, Academy of Art University, The Santa Fe Photographic Workshops, The Julia Dean Workshops and the Photo Experience Workshops.

An early adopter of select technologies such as print-on-demand books and magazines, Milnor has created and published over one hundred unique titles, including the recently released “Manifesto Magazine,” which showcases the world’s best documentary photography.

Additionally, Milnor is the author the blog Smogranch which allows him to speak his mind, post his mother’s poetry and bring together like-minded people around the globe.

His work is in the collections of The Los Angeles County Museum of Art, The George Eastman House and The Santa Barbara Museum of Art.