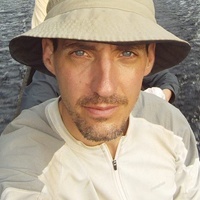 Chris Linder uses photography and multimedia to communicate science. His photography career began while working as a research technician at the Woods Hole Oceanographic Institution, where he was frequently called on to document oceanographic expeditions. Chris’s images have appeared in museums, books, and magazines, including Geo, Nature’s Best, Outdoor Photographer, and Wired. He has been recognized with awards from the Veolia Environment Wildlife Photographer of the Year competition, Nature’s Best Photography Windland Smith Rice International Awards, and the International Conservation Photography Awards. He is a member of the International League of Conservation Photographers. Chris’s most recent project connected researchers with the public during the 2007-2009 International Polar Year using daily online photo essays and lectures ‘from the ice’ to museum audiences nationwide via satellite phone. This project, funded by the US National Science Foundation and the Richard King Mellon Foundation, took him from the Greenland Ice Sheet to penguin colonies on Antarctica’s Ross Island. The images from these expeditions will be published in a book titled Science On Ice (University of Chicago Press, Fall 2011).