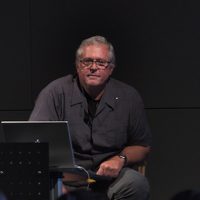 Art Brewer is a largely self-taught photographer, his only formal instruction being a seminar with Ansel Adams. Beginning in 1968 as the principal staff photographer for SURFER Magazine, Brewer has journeyed for much of his life to the world’s vast panoply of islands, where he has produced everything from journalistic coverage to location work. Brewer’s work at his Dana Point studio has yielded a wide range of portraiture and staged art pieces.