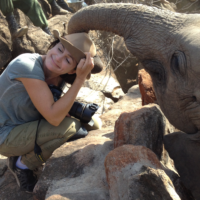 Ami Vitale‘s journey as a photographer, writer, and filmmaker has taken her to over 100 countries where she has witnessed civil unrest and violence, but also surreal beauty and the enduring power of the human spirit. She has lived in mud huts and war zones, contracted malaria, and donned a panda suit—all in keeping with her philosophy of “living the story.”

She is also a founding member of Ripple Effect Images, a collective of scientists, writers, photographers and filmmakers with a mission of creating powerful stories illustrating the very specific issues women in developing countries face.