In 2019, U.S. Customs and Border Protection agents arrested more than double the amount of migrants than the previous year – the most in more than a decade. The debate around border crossings and the detainment of migrant families and children has created even more divisions in the media, and among politicians and the public. Yet, this conversation is driven primarily by those untouched by the crisis. They are stories not told by those living this reality, but rather by outsiders observing it from a distance.

By “working outside of the white gaze,” architect Ronald Rael argues that artists and architects can better understand the complexities of a landscape and inspire the transformative effects of contemporary art made at border lands. Convivencia: Art Making at the U.S.-Mexico Border, will be a conversation about coexistence, representation, and the dialogue that informs community-based art in these contentious regions.

Rael, the Chair of the Department of Architecture at UC Berkeley, will engage in a presentation and discussion with W|ALLS featured photographer, designer, craftsperson, and founder of Art Made Between Opposite Sides (AMBOS) Tanya Aguiñiga. How does making art at the southern border create moments of cultural interaction, exchange, and communication between communities inhabiting both sides of the divide? With this question in mind, Rael and Aguiñiga will shed light on how performative gestures of convivencia – or “hanging out and having fun” in close proximity, in Rael’s loose translation – can serve as valuable tools for fortifying and amplifying the most authentic, but least-heard voices in a crisis. 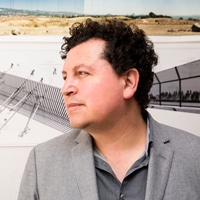 Ronald Rael draws, builds, writes, 3D-prints, and teaches about architecture as a cultural endeavor that is deeply influenced by his unique upbringing in a desolate alpine valley in southern Colorado. He is the Chair of the Department of Architecture at UC Berkeley and holds a joint appointment in the Department of Art Practice. His recent book, Borderwall as Architecture, is a timely re-examination of what the 650 miles of physical barrier that divides the United States of America from the United Mexican States is, and could be. It is both a protest against the wall and a projection about its future. You can see his drawings, models and objects in the permanent collections of the Museum of Modern Art, the Cooper Hewitt Design Museum, and the San Francisco Museum of Modern Art. 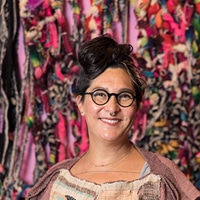 Tanya Aguiñiga is a Los Angeles-based artist, designer, and craftsperson who was raised in Tijuana, Mexico. She holds an MFA in furniture design from Rhode Island School of Design and a BA from San Diego State University. In her formative years, she created collaborative installations with the Border Arts Workshop – an artists’…

W|ALLS: Defend, Divide, and the Divine examines the historical use and artistic treatment of walls over centuries. Across diverse civilizations, walls have been central to human history, from Hadrian’s Wall to our current debate over the U.S./Mexico border.